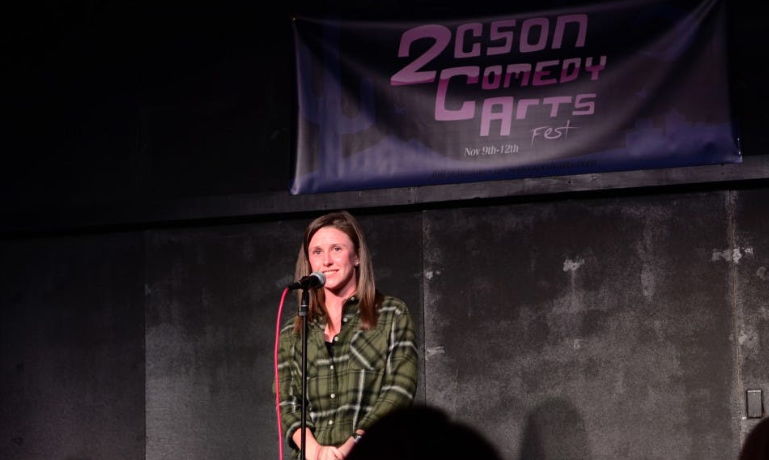 This is the festival’s first annual show, and Thursday’s show started off with three women storytellers. Each woman stood onstage to share a monologue that left the audience laughing. The event showcased FST! Female StoryTellers, UA’s Comedy Corner, Unscrewed Theater’s From the Top and many more. The festival had workshops and performances each day until Saturday evening.

“If you look around Tucson there’s a whole lot of women working really hard, and I just wanted to showcase them and the work that they are doing,” Bartlett said.

Bartlett said this is a unique festival because it combines three art forms that are usually separate worlds: storytelling, standup comedy and improv. She wanted to have these different performers to come together for a greater cause.

“I think women are strongest when we push each other forward, and that’s what I wanted to see,” Bartlett said. “This is a time we can all come together to celebrate and have some laughs.”

“I don’t even consider myself to be a comedian, but Female Storytellers gives room for you to be funny, vulnerable and real,” Deady said.

The festival encourages performers from all different groups to come and share their stories. Cy Barlow from the Unscrewed Theater performed Thursday evening in the second half of the show. She said she was delighted to perform and happy to be invited. She’s excited to see women come together for a shared cause.

“It’s nice to see women come together just to make each other laugh,” Barlow said. “To be part of that in a way that’s specifically focused on women being funny is awesome.”

Barlow has high hopes for the weekend but just wants people to have a good time.

“I just hope people laugh and they want to see more,” Barlow said. “There’s nothing like the charge of hearing a bunch of people laugh in the dark at what you did.”

All the performers this weekend were women, but many men came out to support. Bartlett said this festival isn’t just for women; men are interested and want to join. The festival held a panel for men on Saturday afternoon.

“We found that a lot of men are coming to these and saying ‘I want to help you but I don’t know how,’ so that’s what the panel is going to speak to,” Bartlett said.

The Tucson Improv Movement holds shows every month. Their next performance will be March 3 from 9-10 p.m.