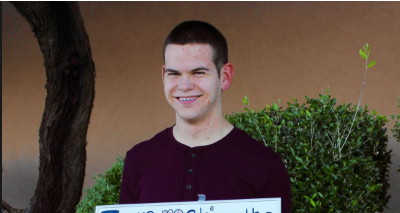 By Johanna Willett Arizona Daily Star Dec 26, 2016 When Alexander Pye started volunteering as a junior docent at the Arizona-Sonora Desert Museum, he found his people. Friendly, quirky and into science — just like him. Alexander, 17, is now in year five of the two-year junior docent program. He has easily volunteered 1,400 hours, he says. But as high school graduation approaches, so, too, does the end of his time as a junior docent. “I want to continue to volunteer,” he says. “It had a huge impact on my life. It made me happier. I look forward to going over there and seeing my friends and working with the kids and animals.” Next year, the Amphitheater High School senior thinks he’ll stay in town and go to Pima Community College at first. That means another potential year as a museum volunteer. Junior docents typically volunteer two Saturdays a month for most of the day. In his five years at the museum, Alexander has missed one Saturday — for the SAT exam. It’s a track record better than most employees, says Catherine Bartlett, the education specialist at the museum. “He’ll come early and stay late,” Bartlett says. “This is everything to him, and this program is something for kids that don’t fit in at school, they can find a community out here of scientific-minded, nerdy camaraderie.” A lot of that has to do with Alexander, who has allowed the pangs of not fitting in elsewhere to fuel his desire to include others here. “He makes sure that everyone else feels part of the family,” Bartlett says. “He’s super welcoming, really intelligent and he likes to teach the incoming new kids the topics we teach to visitors. It’s striking that he has also managed to meet our adult docents and make friends and establish positions with them.” The other junior docents — there are about 10 right now — voted to make him the junior docent captain, giving him responsibilities to manage and coordinate the duties of his peers. “We have our own slang,” Alexander says. “We have a mother and a father, and I basically skipped father and am just grandfather.” Because if any junior docent has seniority, it’s Alexander. “What I found that the Desert Museum did for him was give him more confidence speaking to strangers and adults and children,” says Alexander’s mom, Andragayle Pye. “It gives him a facility to share knowledge that he has that kids his own age don’t care about. He has also found a group of friends who accept him and get him.” And ragayle first learned about the junior docent program through a museum newsletter, but at the time, Alexander wasn’t the minimum age of 13 yet. Sign up for our Breaking News newsletter Get breaking news alerts delivered to your email inbox. Email Address * I understand and agree that registration on or use of this site constitutes agreement to its user agreement and privacy policy. So they waited. “He has learned giant binders full of information,” Andragayle says. “The knowledge he has accumulated in five years is incredible. When we go to the Desert Museum, we have our own private tour guide.” Junior docents are responsible for learning about the desert’s ecosystem and its individual components and presenting it to guests. Sometimes, that means handling animals. Volunteering at the museum has spurred Alexander’s own love of biology. “I’ve always been into science,” he says. “When I first started liking science, I wanted to be every kind of scientist.” Andragayle chimes in: “He said he wanted to be an ‘ist.’ It didn’t matter what he studied. He wanted to be it all.” But not anymore. When Alexander begins college, he thinks he’ll study biology and environmental science, along with a few classes on special education. At Amphitheater High, he is a peer mentor for special education students — another population he loves to make feel welcome. “We really think that this generation, his generation, the middle school and high school students, are a prime turning point in understanding their role in preserving the desert,” says Allison Miller, the museum’s volunteer and internship programs manager. “By taking that role early and being on grounds as a junior docent, he is the one educating other kids his age. Through his leadership and role-model behavior, he has been able to inspire other people to live in harmony with the natural world.”